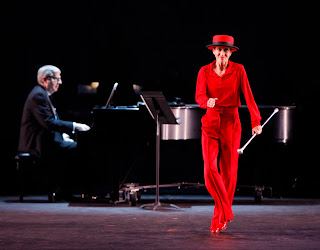 Marvin Hamlisch at the piano with Natalie Enterline
About a year ago, Marvin Hamlisch called to congratulate me on an evening I produced and directed for the Career Transition for Dancers' gala called "America Dances." At first I thought it was a prank call because he didn't say, "So-and-so gave me your number." He was interested in using a young Mambo 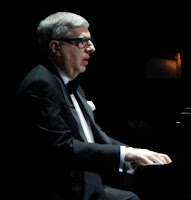 couple on one of his youth programs. It wasn't until he commented on liking the fact that his music was used in a film montage saying, "You know I wrote A Chorus Line," that I knew it was him.
I called Marvin back a couple days later and asked if he'd be interested in exploring something.....and writing something.....for the next benefit that had to do with a dancer's "Act 2." I said, "A Chorus Line is a brilliant classic, and about many many things, but what about something about the trajectory of what happens after....when dancers stay in the field, they move out of the field? No matter what, we never stop being dancers. The dancer stays alive in us, always. I am a dancer dancing when I'm moving or not, I am a dancer dancing even when I stop."

It took about 9 months to make this piece happen. But on November 8 at City Center, the 25th Annual CTFD Gala, "I'm Really Dancing" was heard on stage for the first time. Of course, it is insane to try to create a new piece for a benefit, when artists volunteer their time and it is impossible to pin people down to rehearse. In fact, the piece never was done with everyone in the cast until the actual show itself. Ninety percent of it was organized to a meticulous second in my head. I had to make the staging very simple for all the artists singing. Entrances and exits had to be directions I could send in an e-mail. Angela would start on Center Center with Marvin in a down spot light; Karen would move from Upstage Left to Downstage Right; Charlotte the opposite diagonal; David and Annie would come on from DSL (Downstage Left) to DSR (Downstge Right) - first wing; Chita from USL to Center with Marvin and sing; and Randy would enter from DSR - then pull Marge on and both dance across the front for the last chorus, before joining the line-up with everyone.... 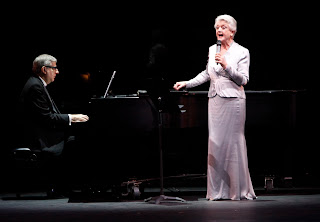 Angela Lansbury was great to work with. She requested her lead sheet and a CD of the melody months in advance. We asked if she'd be OK with singing it in the key of D which she agreed, but later I got a call from her music director in LA saying she really needed it to be in a lower key. She even came to a rehearsal on Sunday, the day before the event - a rehearsal that I tried to gather everyone in the piece - just to put it together - just to actually see it other than

on paper - once before the show (but to no avail).

Angela started the song off by singing the verse of Rupert Holmes's lyric:

YOU CAN ALWAYS SPOT A DANCER ON THE SIDEWALK BY THEIR STRIDE
THEY SPRING AS IF CEMENT'S A TRAMPOLINE
AND THROUGH EACH HUMDRUM DAY ALL DANCERS FLOAT AND WEAVE AND GLIDE
LIKE ALL THE WORLD'S A STAGE OR SILVER SCREEN
Karen Ziemba, what a trouper! She was working in San Diego at the Old Globe Theatre. She had already memorized the whole song 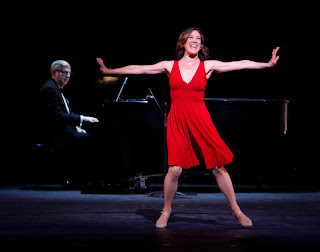 by the time I talked to her, a month before the event. She was not coming into NYC until the day of the show - in fact her plane was to land at 3:00 p.m. Our tech rehearsal was at 3:50, so she would clearly miss that. I asked Mary MacCleod if she wouldn't mind singing Karen's lines for that tech for continuity of the piece. Karen did get in - no delays - and rehearsed between 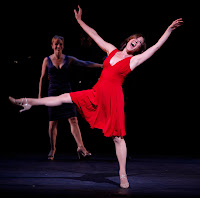 by 5 p.m. I never even saw her until the show. She sang the first chorus moving from USR:

Then came Charlotte d'Amboise from USL (see her behind Karen to the left above!). Charlotte
had extended her 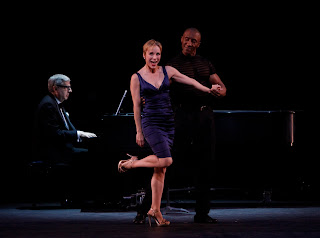 performance in Chicago so ended up not being free to rehearse on Sunday. She sang the lyrics below with Greg Butler escorting her across the stage:
WHEN I STOP TO POSE AND SMILE
AS THE CAMERAS START TO FLASHAT SOME AFTER THEATRE BASH
I'M REALLY DANCING 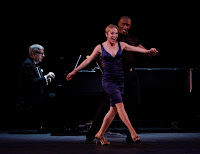 Next we had Desmond Richardson. He moved from
the second wing straight across the stage - so smooth,
and with such cool grace. People questioned me as to whether
he could sing or not. Well no question, he can sing! 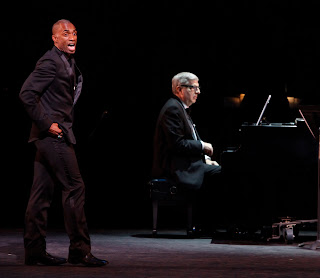 (his lyrics)
THE CARPET MIGHT BE RED BUT WHERE I TREAD, I CUT THE RUGGING
THOUGH ELEGANT MY STRIDE, DEEP DOWN INSIDE I'M JITTERBUGGING 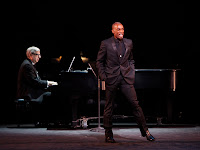 And now, for the last lines before the dance break, came Ann Reinking and David Warren Gibson. I had hoped Bebe Neuwirth would originally sing this with Annie, but she was performing "All That Jazz" just before, and she would have not wanted to be thrown into it without rehearsal. An 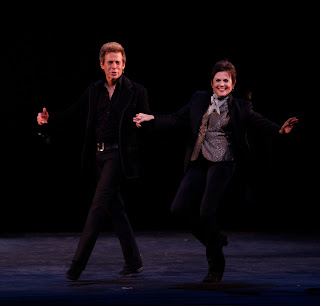 nie did come to the Sunday rehearsal and we figured out that she and David would trade lines. Now, she insisted she could only sing certain lines because of her current vocal range.

Her lyrics were:
MY INNER GIRL WILL TWIRL SUBLIME
WHETHER DANCING OR ROMANCING
WHEN I CHAT WITH SHERRY LANSING
DON'T YOU KNOW I'M DANCING

She said she could not sing the first line, "My inner girl will twirl....". Hummmm,

well how can David sing that, I asked. He can sing "Her inner girl will twirl....etc.". Great! I inwardly was thinking.....I hope Rupert Holmes won't notice because there is no time to ask his permission! The other little obstacle was that Annie knew me as a virtuoso dancer and had seen some of my acrobatic choreography. She was afraid I was going to ask her to do something complicated. "No, no, no," I said. "You're a director and choreographer....do what you want! I prefer you ju

st walk - a simple walk to justapose the elegance and artistry of the mature artist with the bombastic youthful energy of the kids in the dance break section that comes in the middle of the song." She loved the idea. However, each time I saw her rehearse with David the steps increased and by the time she got on stage she was dancing and jumping and leaping into David's arms - the audience loved her.

The DANCE BREAK segment comes here - in a separate blog you will see photos of baton-twirling Natalie Enterline and the multi-dance talent Ben Needham-Wood, along with ABT II and World Cup All Stars (the top cheerleading group in the world).

In the photo directly below, you can see Chita Rivera entering on the right - Ben and Kevin were doing back flips across the stage and as she hits center in front of the piano the music stops and the boys were off stage. Applause! 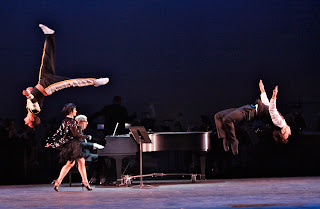 As Chita entered the entire history of musical theater entered with her. Another real trouper. She had also returned from out of town the morning of the gala. It was miserable weather and she didn't want to drive into the city. So Dax, my assistant, made sure there was a car to pick her up. She had called my musical director, Jim Morgan, the night before to say that she had not memorized the lyrics yet and to make sure we had a back-up. I had Dax e-mail her assistant, Rosie, to say not to worry, she could read the lyrics, that it was just a fun number and no need to feel pressured. Which she ended up doing - right at the piano with Marvin. 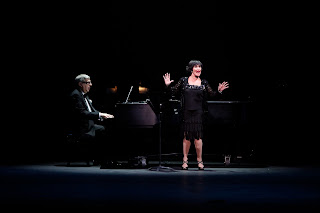 AS THE YEARS GO MARCHING ON
I MAY LOSE A STEP OR TWO
BUT THE SOFTNESS IN MY SHOE
SAYS I'M STILL DANCING....

THOUGH MY GRAND JETES ARE GONE
I'M A WINNING DANCE MACHINE
ONCE BEGINNING MY BEGUINE!
JUST WATCH ME DANCING

Last but not least came Randy Skinner, who was the associate choreographer on 42nd Street when Gower Champion first put the show on Broadway. He had danced on the program already in the Audition number from the musical, so I asked him if he wouldn't mind both singing in the finale and bringing on Marge Champion to boot! I called Marge, and she loved the idea. They both came on Sunday, and by the end of the rehearsal Margehad ch

oreographed practically a whole number with some famous moves from her past. He sang: 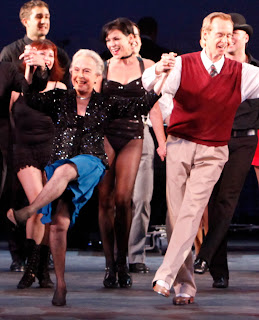 At 91 years old, look at Marge in the blue
skirt - she definatly kicked the highest in the end group finale line-up!!! 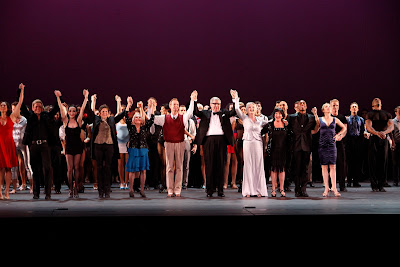